The History of the CAF

It began with a single plane. 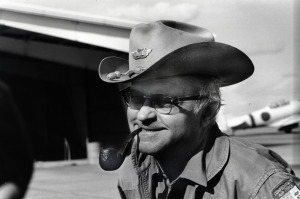 Lloyd Nolen and a small group of ex-service pilots from the Rio Grande Valley in Texas pooled their money to purchase a P-51 Mustang in 1957. They formed a loosely defined organization to share the pleasure and expense of maintaining the Mustang.

A short while later, the group added a pair of F8F Bearcats. At this point, the mission of the CAF became clear: save an example of every aircraft that flew during World War II ~ a mission no one else was undertaking.

What started as a hobby became an urgent mission to preserve history.

By 1960, the group began to search seriously for other World War II aircraft but it quickly became apparent that few remained in flying condition. By the end of the war, America had produced nearly 300,000 aircraft. Just 15 years later, almost all the warbirds were gone.

Decommissioned and stripped of armament and instruments, most of these proud warriors were scrapped or abandoned. No one, not even the Air Force or Navy, was attempting to preserve the historic aircraft that changed the world forever.

On September 6, 1961, the CAF was chartered as a nonprofit Texas corporation in order to restore and preserve World War II-era combat aircraft. By the end of the year, there were nine aircraft in the CAF fleet.

In 1965, the first museum building consisting of 26,000 square feet was completed at old Rebel Field, Mercedes, Texas. The CAF created a new Rebel Field at Harlingen, Texas, when they moved there in 1968, occupying three large buildings. The CAF fleet continued to grow and included medium and heavy bombers such as the B-29, B-25, B-17 and B-24.

Collecting aircraft for nearly a half a century, the CAF now ranks as one of the largest air forces in the world. Today the CAF has approximately 10,000 members and a fleet of almost 160 airplanes representing more than 60 different types—including planes from several foreign countries and other military conflicts since World War II.

The Headquarters of the CAF is currently located in Midland, Texas but will be moving to Dallas, Texas by 2015. We have members in every state and 28 foreign countries.  Our members have joined together in 26 states and four foreign countries to form units to foster camaraderie and, in many cases, actively support one or more of the classic military aircraft operated by the CAF. The move to Dallas was announced as below:

The Commemorative Air Force (CAF) has announced its selection of Dallas Executive Airport as the location for their CAF National Airbase and corporate Headquarters.

“After an intensive one-year nationwide search, which began with 23 cities and narrowed to six then three finalists, we are proud to announce that the CAF Board of Directors has selected Dallas Executive Airport as the location to build our National Airbase” said Stephan C. Brown, President and CEO.
CAF Warbirds at Dallas Executive Airport

According to Neils Agather, CAF Chairman of the Board, “From the start, the CAF Board of Directors laid out disciplined criteria for the location, such as having an airport large enough to operate our aircraft and airshow, being part of a large metropolitan area, having interstate access, and so on. We unanimously found
Dallas Executive to be the best fit with our needs.”

The CAF will move a few initial staff in 2014, with the full operations of its Headquarters arriving in Dallas by the end of 2015. “We also have the goal of constructing a world-class aviation visitor attraction, unlike any other in the United States,” said Brown. “It will educate and entertain young and old alike using the very best of modern display techniques, including interactive displays, 4D movie experiences and hyper-realistic flight simulators. We will also be using the most interactive assets we have – the largest fleet of flying vintage military aircraft in the world. And to that end, we are announcing our plans to raise the funds necessary to build this facility, initially estimated at $40 million.”

“This will be a major tourism and educational asset for the City of Dallas” said Adam Smith, CAF Executive Vice President and National Airbase Project Leader. “We have a unique opportunity at this location to inspire hundreds of
thousands of children and adults with some incredible airplanes and also to share the important stories the aircraft carry, of human endeavor and sacrifice in the name of freedom.”

“I can see yellow school busses dropping our children off to learn history through the sights, sounds and smells of real aircraft, not just a computer screen,” Dallas Mayor Pro Tem Tennell Atkins echoed. “Seeing these aircraft fly makes history real. I am especially excited about the CAF’s ‘Rise Above’ initiative which uses a Red Tail P-51 Mustang and the lessons of the Tuskegee Airmen to show our youth that if these brave men could ‘rise above’ their circumstances of discrimination to fight for their country, then they too can rise above their own circumstances to succeed.”

Dallas Mayor Mike Rawlings led the pursuit of the CAF and his team worked closely with the CAF and its consultant Jones Lange LaSalle over the past year to agree to terms and find the right location on the airport.

“I told the CAF folks from the start that Dallas was the only clear choice for their National Airbase. I am excited they agreed and look forward to their role in helping our city grow south,” Mayor Rawlings said. “The CAF will be a welcome addition to the museum and educational community here in Dallas, and it will provide cultural and recreational activities for residents and visitors alike.”

Along with the planned year-round public attraction, the CAF plans to hold up to three major events per year; including an annual World War II airshow. CAF’s 164 aircraft nationwide perform in over three hundred air shows per year, nine of which the organization produces itself.
“Our goal is to make the Dallas airshow the preeminent ‘Warbird’ airshow in the nation,” said Brown. “We plan to bring in aircraft and re-enactors from all over the country so the community can enjoy a family event unlike any other.”

CAF’s National Airbase will become the permanent home to the world’s only flying B-29 Superfortess FIFI and the B-24 Liberator Diamond Lil one of only two left flying.  Other exciting fighters, cargo and transport aircraft will also make Dallas Executive their home.  On display at the press conference were the B-29, B-24, P-51C Tuskegee Airmen, B-17 Texas Raiders, A-26 Invader, C-45 Bucket of Bolts, R4D Ready for Duty, P-40 as well as several other World War II warbirds.

The CAF reached initial terms with the City’s Economic Development and Aviation Departments in early April and the City Council’s consideration of a proposed lease and associated financial arrangements have now taken place.